“I’ve already been in motorsport 18 years now, but definitely 2014 was the highlight so far,” Wittman told the 24 Motorsports Blog.

Impressive Zandvoort pole hinted at things to come for Wittmann

After a season as BMW test driver in 2012, Wittmann made his DTM debut in 2013 with MTECH, in which a couple of events pointed to his impending success.

His sole pole position of the season at Zandvoort was hailed as the single-lap performance of the year by much of the DTM paddock, and a great drive to second place with a tactical battle going on all around him at Spielberg certainly pointed at things to come.

Wittmann moved to Team RMG for 2014

2014 opened in the greatest possible way for Wittmann, now driving for Team RMG, as he gave the team its first victory after multiple woeful seasons for the squad and scored his own maiden win in the process at Hockenheim.

“I think the team was quite happy. They had two difficult years in DTM and now they have achieved their first win and in the same year, to win the team title. I think it was a great year for them overall, just a great 2014.”

Perhaps key to Wittmann’s title this year was his ability to finish and remain consistent when he didn’t have the fastest car, a sure sign of Wittmann’s maturity.

“With only 10 races it’s important to score as many times as possible and so it’s very important to be consistent and always be in a good position on the grid and for Sundays race and to be up at the front.”

Wittmann wrapped up the title with two rounds to go, a feat in itself with only ten races in the season, and became the youngest German champion in the DTM’s history. However, the driver from Furth has no illusions as to whether 2015 will be a repeat of 2014.

“I think it [2014] was a really great season, I don’t know if this is possible to do it again in the same way as we did it this year, especially because in DTM the field is so close and we all start from zero again next year.

“There’s not a guarantee we will continue like this for 2015 but for sure we try to do our best to be in the same position as this year, of course I hope for that.

“For us the focus is on staying motivated and to get everything out of the car. Hopefully we will be as successful next year as this year.” 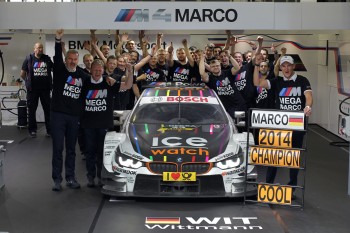 Wittmann’s title was also the first for his team, RMG

The reward for this year’s title was a long-term contract extension and a test in a Formula 1 car, a 2012 Toro Rosso at Imola, which there is no denying that the German is excited about.

“For me it’s a great opportunity to get this kind of surprise from BMW and from Toro Rosso; the opportunity to drive an F1 car, for me it was always a dream to be in such a car. I’m looking forward to get a first taste of this car with the power, the grip, it will be interesting.”

No one could have predicted after the debut win in Hockenheim that Wittmann would be so dominant in 2014, but the German can look back with a high level of satisfaction this offseason, dominating one of the world’s premier Touring Car series in a way seldom seen before.